Roles in the MDH delivery process

A large number of stakeholders are active in initiation, design and planning, construction and regulation of MDH in New Zealand. Some of these stakeholders and the roles they play in the process to deliver MDH are outlined in this section.

The statistics in this section are from the Whats On dataset for 2015/16.

Most MDH work is initiated by developers. This includes organisations such as Housing New Zealand Corporation (HNZC) – the major social housing provider in New Zealand – and large-scale retirement village operators. Other developers include those delivering one-off apartment buildings and small-scale builders delivering terraced housing or flats.

Developers are a key group in the delivery of MDH. Their mode of operation is entrepreneurial, meaning that they seek financial gain in recognition of the financial risks involved in bringing a development to market. Developers focus on several roles including:

Many of the larger public and private developers are both land owner and developer, including most of the social housing providers.

In the 2 years to December 2016, developers that delivered more than 50 units made up only 5% of the total number of developers but they produced 33% of all new MDH units. The other 67% of units were initiated by the remaining 95% of developers, at an average size of 10 units per developer.

Large private-sector developers provided about 22% of all MDH in this period. Most of these developments are single-location projects that are approved either in one consent or as staged consents.

Many development companies retain the same legal identity from project to project, especially if they wish to enhance their public profile. Others establish an independent legal entity for each development as a means to clarify and simplify their legal and financial responsibilities to owners.

Smaller MDH developments are often headed by the main contractor who arranges finance and sales on completion.

Financiers provide funding for MDH projects and are an essential element in the delivery of buildings that have significant cash demands before completion and sale to end users.

Typically, developers identify a new housing project for a specific site and develop a proposal for funding by banks or other financiers. Financiers are primarily interested in making a profit, and to this end, they undertake a risk analysis of the project to assess the security of their investment. There is a close relationship between developers and financiers, and sometimes the same company undertakes both roles.

The costs to deliver MDH can vary considerably depending on the type of construction, location and the target market.

In 2017, government estimates found the costs to develop a hypothetical 800 m² site in a mixed suburban housing zone in Auckland range from $1.9 million for two detached houses, $3.4 million for six terraced houses. Costs to deliver apartment buildings can vary considerably, starting at an estimated $15 million for a hypothetical 4–7-storey apartment building containing 30 units, and increasing sharply for more desirable suburbs and higher specifications.

At present, the trading banks typically require pre-sales sufficient to cover their debt before they are prepared to fund new multi-unit developments. Even then, they will typically fund a maximum of 70–80% of a development’s costs. The remaining funds come from the developer’s equity, with any shortfall made up with second mortgage funding from smaller financiers or merchant banks, depending on how well capitalised the developer is.

Further variations, such as hybrid debt or land bank finance, are available beyond trading banks, with merchant banks and other second-tier lenders offering options for less capitalised developers.

Hybrid debt involves a merchant bank offering all of the lending in return for both debt and equity interests in the development, hence the term private debt. Although this can be more expensive, the developer may benefit from a faster process with reduced legal work by dealing with a single lender, and the lender gains a share of profits in addition to interest.

Land bank finance is less common, but can be used when the developer cannot demonstrate their ability to service the debt, but owns land with high intrinsic value due to land scarcity. In this case, a second-tier lender will apply their specialist knowledge of land scarcity to assess the loan application.

Social housing providers typically commission and either sell or rent MDH to sectors of the community that are not able to afford to buy their own housing. These include HNZC and local government housing providers and retirement village operators who lease out units to individuals with a variety of right-to-occupy terms.

Individual owners usually purchase MDH from developers. They are either owner-occupiers or they may purchase units as an investment and rent them out in the private sector. Depending on the development, the unit may be freehold or have a unit title and a body corporate structure.

The level of involvement given to owners during the design and production of MDH varies from nil to comprehensive. Usually MDH units are sold individually to owner-occupiers or to investors who have no direct input into the design of the project. However, large housing property owners such as councils, aged-care organisations and HNZC commission new MDH. Their brief has a large influence on the quality of new MDH and its impact on the local community. 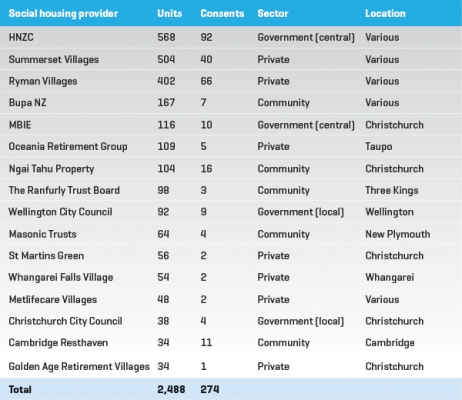 Social housing providers typically have a strong community focus in the design of MDH and good feedback loops once developments have been tenanted (through mechanisms such as post-occupancy surveys). This assists in the ongoing improvement of design to meet the needs of end users.

Designers (including architects, urban designers and engineers) provide expertise across many types of MDH, from basic low-cost units to enhanced high-cost apartments. They design MDH developments and ensure the work complies with local planning and building requirements. Such requirements can include the health and safety aspects of buildings and may involve specialists such as structural, acoustic and façade engineers.

Registered architects tend to design larger, high-cost MDH projects, while architectural designers generally undertake smaller projects. However, there is significant overlap between the two groups, particularly on small to medium-sized projects up to 20 units.

In the 2 years to December 2016, only 4% of designers were responsible for designing 26% of MDH units.

There are approximately 3,000 architectural design firms in New Zealand, employing an average of 2.9 people, including the proprietors. About 800 of these completed MDH work in the 2-year period, but the majority of these were small projects with an average of six units.

Planning consultants are typically engaged by developers for larger MDH projects at the initial project concept and feasibility stage. They provide information regarding the potential capacity of a site against what is feasible under the relevant planning rules.

Council planners provide for MDH through the local district plan. In larger urban areas, district plans can include zones for MDH development in locations that lend themselves to higher-density development – for example, in proximity to transport hubs or employment areas.

Builders undertake MDH construction based on the plans and specifications received from the designer and as approved by the council.

Builders tend to specialise by the size and height of the project. Competitive tenders are the most common contractual arrangement, although an assurance of quality can be more important to developers than minimising cost. A developer may engage a builder they have previously worked with, using agreed rates for different types of work.

Other forms of contract include design and build and early contractor involvement, which both require close collaboration between designers and builders to achieve efficiencies in time and materials.

MDH ranges from single-storey attached housing to 6-storey apartments, and the construction skills required vary across the range of MDH.

In the 2 years to December 2016, just 10% of builders were responsible for constructing almost half (46%) of all MDH units, while 60% of the remaining builders constructed less than 20% of the country’s MDH units.

In some cases, the builder commences construction without a specific end-buyer contracted, having assessed that there will be a ready market for the house to sell during construction or upon completion. Such speculative housing projects are quite small in number, at about 20% of all MDH units built.

The remaining 80% of MDH is built in larger projects with the builder as the contractor only and either the developer or owner funding the work.

Under the Resource Management Act, councils are required to produce, implement and enforce a district plan. These documents zone land for different types of use, including residential housing. Most large urban areas also specifically include zones for MDH.

Within its district plan, a council typically sets rules regarding density, amenity, parking, vehicle access, open space, and bulk and location. A development must obtain resource consent if it does not meet a planning rule or the plan specifically requires it.

Through the resource consent process, councils can also take financial contributions for certain types of development. Financial contributions are imposed as conditions of resource consent and typically include three categories of contributions – parks and reserves, roading and infrastructure. A set amount is charged per unit or lot to contribute towards the council’s costs in accommodating the development within its existing open space, roading and infrastructure networks or mitigating the additional demand placed on these networks by the development.

Councils also have obligations under the Building Act and are responsible for monitoring building design and construction to ensure that new buildings comply with the Building Code and any other relevant regulations. To this end, council building control officers assess building consent applications and building inspectors check building work on site as it progresses. 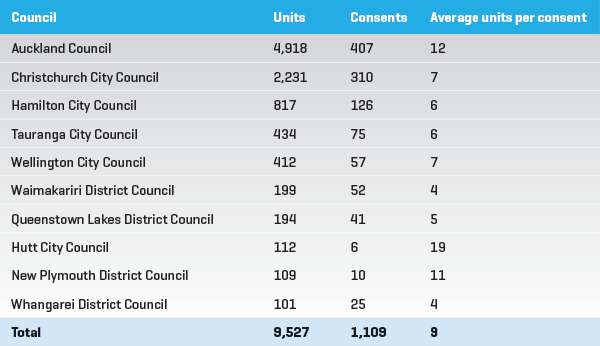 The roles of these industry organisations vary, but the majority seek to advocate on behalf of their members regarding relevant industry issues and provide training (conferences and seminars). Some administer professional development (CPD) programmes where members are obligated to obtain a minimum level of CPD points per year.

Industry organisations can disseminate information to their members and are knowledgeable about the issues and opportunities facing the industry. They are a vehicle for driving behavioural change and promoting knowledge transfer about MDH delivery in New Zealand.

Central government agencies such as the Ministry for the Environment and the Ministry of Business, Innovation and Employment are responsible for the regulatory settings and legislation affecting the development of MDH, including the Resource Management Act and Building Act.

Although not directly responsible for delivering MDH, central government agencies can impact the MDH development process through changes to national-level legislation and regulations. This type of influencing role can promote knowledge transfer at a national level and ensure consistency across the country.

When considering MDH as an investment opportunity, funders typically weigh the project’s potential returns against the risk that something will go wrong. Understanding and mitigating these risks is not only an important part of the funder’s role but a critical part of any successful MDH construction project.

Common risks to MDH return on investment include external factors, such as:

Other risks that apply to the local construction industry in general are:

Risks that are specific to each project include: